Something happened that made me recall one of my childhood’s unforgettable experiences in school. You might not be interested to know it but I’ll still tell it anyway. You have no choice. (*Wink!*)

As far as memory is concerned, I cannot recall myself being a diligent student until I reached being a mademoiselle. Believe it or not, I do not study well. I mean, I really do not study at all. I cannot even remember a day when I thought about reviewing for exams. I don’t care about the top ten, the medals, nor marching at the stage and being applauded. I only care about going home each afternoon from school to check if my pet caterpillar has turned into a beautiful butterfly or what new landscapes could I try to draw or paint, or if mom finally made my favorite yema candy.

When I was in fourth grade, something unbelievable happened in our English class. I’m certain that it is English class because that’s the only subject I can be sure this could possibly occur: my seatmate who is an honor student, a top five student, was surprisingly copying my answers during an examination. And it was too late for me to realize that and dare to do something because our teacher already said her favorite lines, “Finished or not finished, pass your papers.” Then the day I’m most afraid to come did come. She called both of our names and showed our papers in the class to announce the most wonderful news – we have the same score, and exactly the same answers. Without asking, she scolded me and warned me that if I’d cheat(?) again(?), she’ll mark my paper, “zero” and will give me a failing grade.

All eyes are looking at me, casting all their judgments I know. That was the first time I guess I understood the feeling of being dumb in the eyes of anyone, though I never thought I am smart. All I am sure about is that I’m not an honor student but my classmate who is, copied my answers. And now, I’m a cheater in the eyes of everyone. To add to my horror, this didn’t stop and grew even worse. That time during one of our quizzes, when I tried to hide my answers from her, she began pinching me. Yes, pinching me on my arms! Painfully, threateningly the more I refuse to. I’m a late bloomer so I think I look like a kitten that time having no capacity to defend itself from a lion. So I gave in, and you know what happened of course when a coward little girl was swallowed by hear fears to speak. I remained a cheater in their eyes and she, an honor student. In my head, even if I speak, who would believe me? I’m a nobody in the class, she has a reputable name.

Until today, I haven’t told that story to my parents because for a very long time, my fears buried those truths, and even me. My fears muted me. And my fears made me tolerate evil to reign. Now I believe history is repeating itself. It repeats until we learn the lessons it ought to teach us.

I hope you’d understand better why I told that story when I tell you that days ago, after much wrestling with my heart and my hands to write about it, was the Nth time when I saw my writing being plagiarized – copied, used, posted, published – on someone else’s blog as their own without bothering to give some credit to its writer or even care to mention the source. I am certain because they were exactly the same words I wrote and I cannot be dreaming. I’ve checked it, double checked it, even taking a thousand look, to my disbelief that this could really happen. Because to my surprise and disappointment, they were Christian bloggers. (Well, I’m actually afraid if they really are.) I’m not saying all of them are and I’m the only upright here, but heartbreakingly, some of them I realize. And this hurt me more, realizing that even your fellow laborers, your sisters and brothers in this same service, could steal your work and claim it theirs making you the cheater in other’s eyes.

Quoting is far more different from plagiarizing. I’m sure bloggers know that. But I’ve ignored this a couple of times. I said to myself, “No one would believe you. You’re a newbie with a little number of followers compared to them. Who could ever be convinced that it was you who originally wrote those?” But that was my point of awakening. And again, I said this to myself, “Didn’t this happen to you centuries ago and you did nothing because you’ve been too coward to speak? Will you just allow an evil thing to happen again and again undiscovered, unrebuked, uncorrected, because until now you’re a fraidy-cat?”

“The only thing necessary for the triumph of evil is for good men to do nothing.”

This time I dare to be that lion – not the one who’s proud to take advantage on the weak, but that brave heart that stands up for the weak, for what is right, and for what is true. If those who are doing wrong are so proud, how come you who are in the mission of doing the right thing are so afraid?! But to be honest, it took me a while before deciding to write this, making sure that I do not write for myself, not for the feeling of being robbed of something I claim to be mine. Because really, I own nothing; I owe even every single word that I write to my Maker. But it is never right to let this thing continue, much more in the platform of this sacred ministry of blogging among my fellow Christians. And this time, I know, I am writing not out of resentment nor the desire to revenge, but from a heart of an older sister that seeks to rebuke out of love, and out of her Father’s compulsion that comes with the ministry He has bestowed.

So to my fellow Christian bloggers I lovingly and dauntlessly write:

Someday we will all face God, you and me, not as bloggers but as His servants.

When that moment comes, I hope you can look Him in the eyes with a clear conscience knowing that you “never steal”:

That you never steal someone else’s words and ideas by posting them as your own just to gain likes and make people believe those are yours.

That you never steal people’s hearts by working so hard at winning their admiration, forgetting that your mission is to point people to Jesus.

And most of all, that you never steal the glory that belongs to God by taking all the praises from people never giving the credits to Him who enabled you and has put you on that ministry.

Remember, you might gain all the number of followers you want and hear all the praises you desire, but one day you will face God and the only thing that matters is your integrity in His eyes. He will not ask “how many” but “how true” you have been in the ministry He’s entrusted you.

May we exercise truthfulness of character in everything even on this, much more on this, knowing that many are following us and we are accountable to God for them.

May we never be tempted to exchange an upright heart for recognition, valuing God’s approval above all, knowing that promotion comes from the Lord and not from our efforts.

May you never treat this ministry trivial, practicing deceit as if God doesn’t see it. And please stop using the name of our God to gain fame! This is sickening to witness! But I pray, that we’ll all see the sacredness of it because it is of God.

May you not be just another wolf in sheep’s clothing deceiving many, but a true messenger of His in this world so full of lies. Please always choose to be genuine. This crooked world is in dire need of people who won’t compromise fame for God’s approval. Be among the rarest!

Your Fellow Servant In Christ,
Rachel

Thanks to you, my virtual postman/women!

Letters Awaiting For You To Open

Written by the hand of 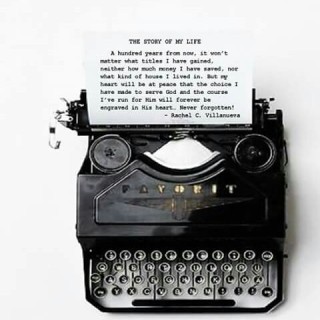 I wanted to be a voice for Christian women who lack the courage and the freedom to speak for Jesus! For if there would be any reason for thoughts and words to be published, it is nothing else than to give glory to my God, the Author and the Giver of it.